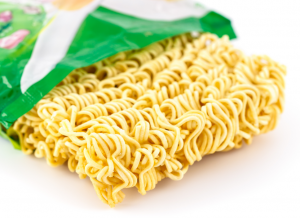 Amy B. Wang of The Washington Post reports that Ramen Noodles are taking over tobacco as the preferred underground currency inmates use in prisons, according to a new study by Michael Gibson-Light, a doctoral candidate in the University of Arizona School of Sociology.

“Prisoners are so unhappy with the quality and quantity of prison food that they receive that they have begun relying on ramen noodles – a cheap, durable food product – as a form of money in the underground economy,” Gibson-Light said in a news release on Monday. “Because it is cheap, tasty and rich in calories, ramen has become so valuable that it is used to exchange for other goods” (NOLA.com).

Over a year, Gibson-Light interviewed 60 male inmates and staff members in an unnamed state-run facility as part of a larger investigation into how prisoners were responding to declining prison services. He labeled what he found “punitive frugality” – that is, as corrections budgets shrink, the cost of care is shifting onto prisoners and their support networks (NOLA.com).

Inmates often used instant ramen packs to barter for other food items, clothes, hygiene products and even services, Gibson-Light observed. At times, he said, he saw prisoners put down ramen packs, or “soups,” as literal bargaining chips during card games. According to the study, one inmate put it succinctly: “Soup is money in here” (NOLA.com).

Gibson-Light said he noted that the move away from a “luxury” currency such as cigarettes occurred even though the prison had not banned smoking or tobacco products. Rather, he wrote that inmates told him they were receiving food deemed “inedible or too little to sustain them for a day” (NOLA.com).

He noted that the inmates at the prison in question used to receive three hot meals a day, but in the early 2000s, the second meal was changed to a cold sandwich and a small bag of chips. Weekend lunches had been eliminated; overall, portion sizes for every meal were reduced, he said (NOLA.com).

“It’s ’cause people are hungry. You can tell how good a man’s doing [financially] by how many soups he’s got in his locker. ‘Twenty soups? Oh, that guy’s doing good!'” one inmate told Gibson-Light, according to the study. “People will pay more for an envelope when they need to write home to get more soups! Prison is like the streets. You use currency for everything. In here, it’s soups” (NOLA.com).

Although he was surprised to discover the “prison ramen black market,” Gibson-Light said the shift points to a growing concern about per-capita corrections expenditures that have not kept pace with the number of inmates. He cited figures from the Federal Bureau of Prisons that showed states spent about $48.5 billion on corrections in 2010, a 5.6 percent decrease from 2009 (NOLA.com).

Gibson-Light is presenting his research at the American Sociological Association’s annual conference in Seattle this week, according to a university spokesperson.

The ramen study should not be a surprise to anyone who has spent time in prison, said Gustavo “Goose” Alvarez, co-author of “Prison Ramen: Recipes and Stories from Behind Bars” (NOLA.com).

His book, published in November, recounts his experiences in prison over two separate sentences, one in the mid-’90s and another from 2006 to 2013. He quickly learned how critical ramen was to the inmate economy, and over the years he devised ways to jazz up the instant noodles (NOLA.com).

“It’s gold. It’s literally gold,” Alvarez told The Washington Post. “People will actually – and I hate to say this but – they’ll kill for it, believe it or not” (NOLA.com).

Alvarez said he never ate ramen before incarceration but quickly discovered that the cheap bricks were a no-brainer purchase at the prison commissary if he wanted to stretch his account (NOLA.com).

“It got to the point where some people would rather have a decent meal than a stogie, especially the way they’re feeding us in prison,” Alvarez said. “Times have changed to cut a buck” (NOLA.com).