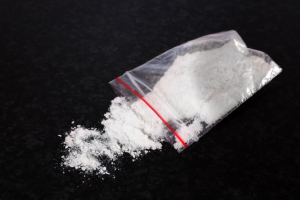 Jed Lipinski of The Times-Picayune reports that the Drug Enforcement Administration on Wednesday (Aug. 31) said heroin and the synthetic opioid fentanyl pose the biggest drug threat to the New Orleans area. Special agent in charge Stephen G. Azzam made the announcement at the DEA’s New Orleans Field Division headquarters in Metairie.

Fentanyl, which is 50 to 100 times stronger than morphine, is often combined with heroin to create a stronger high, though it can also be mixed with baking soda and other powders to mimic heroin’s effects. Because fentanyl is far cheaper to produce than heroin, experts say many drug traffickers see it as a more economical choice (NOLA.com).

In July, Orleans Parish Coroner Jeffrey Rouse said fentanyl accounted for a rise in the number of opioid deaths in the first half of this year compared to 2015. As of May 21, Rouse said 65 opioid-related deaths had been confirmed, compared with 47 homicides in the same period. Only 63 deaths were attributed to opioids in all of 2015 (NOLA.com).

DEA spokeswoman Debbie Webber said DEA agents across the country are being trained in how to administer the nasal spray version of naloxone, which can counteract the effects of opioid overdoses and exposures. Coming into contact with as little as 1 milliliter of fentanyl can be fatal, Webber said, putting agents who conduct drug seizures and field tests at risk (NOLA.com).

“Hazardous amounts of fentanyl can be absorbed through the skin,” Webber said, adding that agents may be required to use naloxone on other agents in the event of an exposure (NOLA.com).

Despite the national spotlight on the heroin and opioid epidemic, Webber said cocaine remains a serious problem in the New Orleans area. Around 40 percent of the local DEA office’s seizures involve cocaine, she said, and another 40 percent involve heroin (NOLA.com).

“Heroin tends to get peoples’ attention, of course, because a lot more people are dying from it,” she said (NOLA.com).

Azzam, who took over as special agent in charge in April, is targeting drug trafficking organizations in an effort to cut off the source of heroin and fentanyl pouring into New Orleans from larger cities like Houston, Atlanta and Miami, Webber said (NOLA.com).