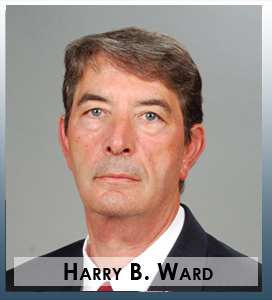 Harry B. Ward was born and reared in New Orleans, Louisiana. After graduating from De La Salle, Mr. Ward attended the University of Mississippi. There he obtained a Bachelor of Science in Environmental
Geology. Mr. Ward obtained his Juris Doctorate from Southern University Law Center and his Master of Laws (LL.M.) in Energy and Environmental Law at Tulane Law School.
As a former Public Defender, Mr. Ward has tried over 100 felony trials before a jury. Mr. Ward has achieved notable results as the first chair in a capital murder trial. He has also been successful in a statutory rape trial and achieved a “Not Guilty by Reason of Insanity” in a felony DUI trial. While in private practice, Mr. Ward tried numerous felony and misdemeanor matters as well as numerous civil matters with notable results.
Through out college and law school, Mr. Ward worked as a roustabout, marsh-buggy and heavy equipment operator, bartender, waiter, and as a member of Teamster’s Local 270 in New Orleans. Mr. Ward uses his life experiences to think “outside the box” especially in complex legal matters.
Mr. Ward is licensed to practice law in Louisiana, Mississippi and Nevada. He is also admitted to practice in all state and federal courts in Louisiana, Mississippi, and Nevada as well as the United States Fifth Circuit and Ninth Circuit Court of Appeals.