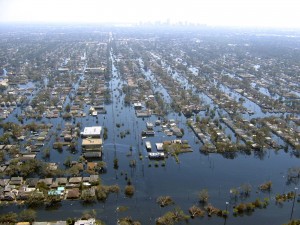 Faced with a landscape made increasingly of concrete, New Orleans officials are looking to revamp rules to force developers to add more “green” features to their projects, such as rain gardens and permeable sidewalks.

At the same time, officials also want to offer a way for developers to opt out of those rules if they make a project too tough to comply – so long as those developers also contribute to a new fund for citywide green infrastructure projects.

Officials and experts on living with water say the rule changes and infrastructure fund would help streamline the city’s construction permitting process, keep construction debris out of catch basins and – best case scenario – bolster the long-term health of a water-locked city.

The rules would come in the form of three ordinances headed to the New Orleans City Council for a vote on Thursday (March 8).

“It’s a step in the right direction,” said Dana Eness, executive director of the local planning nonprofit Urban Conservancy, “but there’s more that has to be done.”

Developers of large residential and commercial projects in New Orleans have been required to incorporate drainage features on properties since 2015, when a roster of stormwater management rules were adopted into the city’s comprehensive zoning ordinance. Essentially, a property’s drainage features must capture and filter the first 1.25 inches of rainwater, lessening the city’s drainage burden.

The features include rain gardens, detention basins, permeable pavement and vegetated swales – “things that slow down the water and act as if the area were undeveloped,” Tyler Antrup, the city’s urban water program manager, said during a presentation on the ordinances last week at City Council’s public works committee meeting.

But the rules from 2015 haven’t worked as smoothly as planned, Antrup said. In particular, by residing in the comprehensive zoning ordinance, they have tacked on an average 139 days of wait time for construction permit approvals, frustrating developers in the process.

One of the three proposed ordinances shifts the rules from the zoning law to the city’s building code, effectively cutting out the time needed for city planners to review stormwater management designs. Instead, the Department of Safety and Permits would issue stormwater permits simultaneously with other necessary building permits, Antrup said, reducing the average wait time down to 33 days.

To make sure green features are working properly, the proposed ordinance would require buildings to retain a new annual certification after inspection by a landscape architect or professional engineer.

Robert Mora, the founder of the local engineering design firm Batture LLC, said Tuesday that he believes the ordinance will help streamline permitting for developers without losing the heft of stormwater management requirements.

“The city knew they needed to make adjustments and I think they addressed that,” Mora said over the phone Tuesday. “I think by consolidating (the permit process), it’s going to help everything and move to a place where it functions more seamlessly.”

Eness with the Urban Conservancy said the ordinance wouldn’t so much revolutionize the practice of adding green infrastructure as it would soften developers’ frustrations. Cutting red tape, she said, could encourage more buy-in for drainage investments on a per-project basis.

“We certainly weren’t doing much to engender the cultural shift the city keeps talking about needing to make, where people are embracing the idea of living with water,” Eness said in an interview Tuesday. “We need more buy-in, for sure.”

On top of hastening permits, that first ordinance also incorporates a host of rules for developers to follow in order to limit the amount of waste generated at construction sites. Among several rules, it would require concrete mixers to either be washed at a contained cleaning facility on site or be driven back to the mixing plant to be washed there.

The intent, largely, is to keep concrete and other construction debris from flowing into catch basins, which Antrup said he sees happen “frequently.”

Dani Galloway, the city’s interim Public Works director, said last week the city’s director for Safety and Permits, Jared Munster, recently got the go-ahead to hire a handful of employees to conduct construction site inspections. Even without the additional staff in place yet, Galloway said the city has been cracking down on construction sites since last August, when flooding revealed severe deficiencies in the city’s drainage system, including clogged catch basins.

“We have made considerable headway since last August on citing people, especially construction debris, which is a huge problem in this city especially in the downtown area and other areas,” Galloway said last week.

Mayor Mitch Landrieu’s office said Tuesday that since last Aug. 5, the city has issued 32 citations – including 15 for construction debris and 17 to restaurants – for plumbing code violations. The Sewerage & Water Board’s plumbing code “currently serves as the main regulatory framework for preventing and adjudicating illicit discharges in the storm draining system,” the mayor’s press secretary, Craig Belden, said in an email Tuesday.

See the full article at NOLA.com.